The Transportation Corridor Agencies (TCA) and Orange County Public Works have replaced a portion of Oso Parkway with a new bridge structure to provide motorists with a direct connection between Los Patrones Parkway (a new road connecting with Rancho Mission Viejo) and State Route 241. The new bridge improves traffic flow and enhances safety on Oso Parkway and direct access to the 241 Toll Road supports traffic flow in the area. Construction of the Oso Parkway Bridge began in August 2018 and the project opened to drivers, pedestrians and the community on January 13, 2021. For more information on the project's virtual grand opening, click here. 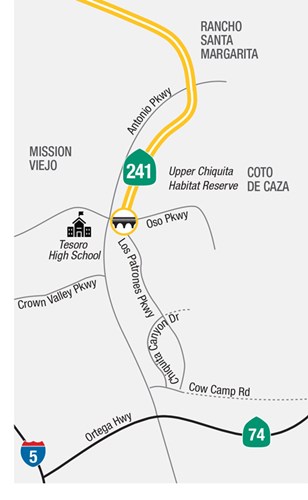 The Oso Parkway Bridge Project consisted of constructing an overcrossing bridge structure for a portion of Oso Parkway to allow the connection of Los Patrones Parkway to the 241 Toll Road. The bridge features six lanes (three in each direction), sidewalks and dedicated bike lanes for public use. Pedestrian access to Tesoro High School is improved with construction of a new sidewalk on the south side of Oso Parkway.

Construction began in August 2018 and the project will be complete and open to drivers on January 13, 2021.