The Transportation Corridor Agencies: A History of Sound Planning

Thirty years ago, through visionary leadership, Orange County made the decision to control its future through self-reliance. The County of Orange and 18 cities devised a plan to enhance the region and provide traffic relief for Orange County’s congested freeways. This vision was brought to life through the creation of the Transportation Corridor Agencies (TCA).

When TCA was formed in the 1980s, an exploding population in the region, worsening traffic congestion and shrinking transportation funds were the reality. With fewer tax dollars available to fund transportation projects, a new approach was taken enabling TCA to plan, finance, construct and operate the 73, 133, 241 and 261 Toll Roads. Instead of government dollars, the roads were financed through non-recourse toll revenue bonds backed only by tolls and Development Impact Fees (DIFs).

The bonds can only be repaid by future tolls and development fees. Since the bonds are not backed by the government, taxpayers are not responsible for repaying the debt, nor do taxpayers carry the risk if future toll revenues fall short.

The innovative financial approach has delivered infrastructure that would cost more than $12 billion if built today.

TCA was created when two Joint Powers Authorities were organized under the provisions of state law and a Joint Exercise of Powers Agreements (JPA) among the County of Orange and certain cities within the County was established. In 1987, Senate Bill 1413 passed, giving TCA the authority to construct the new roads.

While TCA planned, built, financed and continues to operate the roads, the facilities are owned and maintained by Caltrans. The California Highway Patrol provides public safety enforcement.

TCA was formed to improve mobility. We accomplish this by working with partner agencies to prioritize projects that enhance quality of life for Orange County residents. TCA is able to facilitate such projects without placing a financial burden on taxpayers.

Our two Boards of Directors consist of elected officials from each of our 17 member cities and the County of Orange. The Boards meet jointly, though some decisions are considered only by the Agency that a particular action will impact. A small joint staff facilitates Board priorities.

Three decades of success have paved the way for TCA. Sound fiscal management that has led the Agencies to solid financial footing allows us to facilitate key mobility projects such as the Oso Parkway Bridge and the 241/91 Express Connector.

TCA is committed to working with our partners to ensure the more than 2 million drivers who use our roads continue to benefit from congestion-free alternatives that enhance quality of life.

As transportation funding sources dry up, TCA’s contributions are more critical than ever. The same innovative thinking that led to the creation of the 73, 133, 241 and 261 Toll Roads will be relied upon to solve the transportation challenges of the future.

As we drive forward into the new fiscal year, take a look back at a few of our most notable achievements in our FY22 Year in Review. (Interactive)(Opens in a new window) 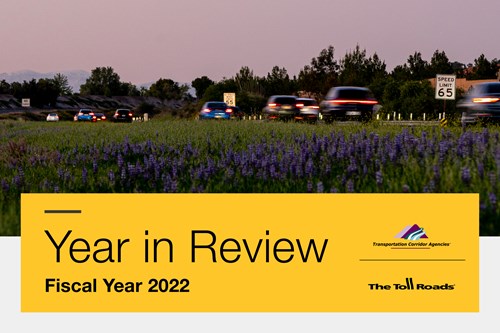